Home » News and Advice » Posts » What is the legal tyre tread depth? And when to change them

What is the legal tyre tread depth? And when to change them

The legal tyre tread depth in the UK is 1.6mm, in a continuous band around the middle three quarters of each tyre. However, this is just the minimum. Some believe that to be truly safe, you should aim for a minimum tread depth of 3mm. 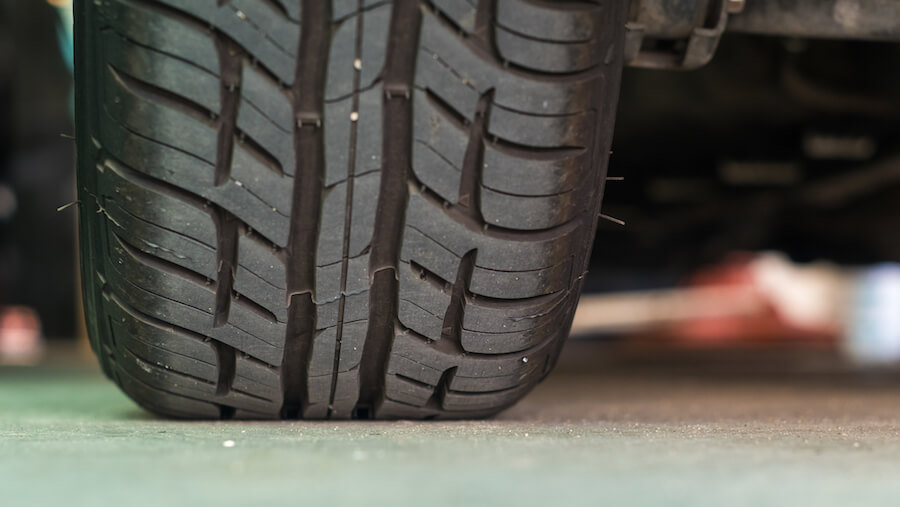 If your tyres are worn, not only will you lose grip on wet surfaces, your stopping distances will also increase. This is why checking your tyre tread depth is perhaps one of the most important checks you can make on your car.

Indeed, tyre tread depth is such a vital issue that UK charity Tyresafe makes every October their official Tyre Safety Month. For the entire month they and their supporters do all they can to spread the word about tyre safety.

The good news is that checking your tyre tread depth is a simple process that anyone can do in seconds.

How To Check Tyre Tread Depth – The 20p Test

There are other ways to check your tyre tread depth. For instance, many tyres now include a tyre tread wear indicator. It’s a raised bit of rubber found at intervals between the treads. If your tyre is flush with these indicators, then it’s definitely time to replace them.

If your tyres are worn, then your car could be said to be an accident waiting to happen. On top of this, if you’re found to be driving with worn tyres, you’re looking at three penalty points and a fine of £2,500 per tyre.

Finally, if you’re involved in a collision with tyre treads worn beyond the legal limit, it could invalidate your car insurance claim.

How Often Should You Check Your Tyres

Get into the habit of conducting a quick and simple 20p test at least once a fortnight, and as part of your routine before you set out on long journeys. If any of your treads are below the legal limit, it’s time for a change.

Regularly inspecting your tyres will also enable you to spot any other potential issues early, such as foreign bodies embedded in the rubber.

During these routine inspections, it’s also a good idea to check your tyre pressure. It should be just right – not too high and not too low. Your car’s manual should tell you the ideal pressure for your model.

When To Change Tyres

This is a difficult one to answer, as tyres wear down so gradually. Also, many factors can alter their longevity, including cold weather, the sort of surfaces you drive on, and how often you drive. This is why it’s important to test your tread depth regularly. This way you’ll catch any issues long before they become illegal and hazardous.

How far do you drive?

Most drivers drive around 12,000 – 15,000 miles a year. At this rate, most new tyres will last for around three to four years before they need replacing. Now, you might think that if you drive fewer miles, your tyres will last longer. This is not the case. Old tyres are not as effective as newer tyres, as rubber compounds degrade as they age. So no matter how often and how far you drive, it’s good practice to change your tyres at least once every three and a half years.

The effect of weather on tyres

Do you live in a cold climate where you need to fit your car with winter tyres once a year? Winter tyres are hardier, but they’re not indestructible. Aim to change them after no more than seven years.

Please note that all of these figures are based on averages. Your car’s manual should feature detailed recommendations for how often tyres should be replaced for your specific model.

How many tyres to change at once

Finally, many drivers wonder – should you replace all four tyres at once, or is it fine to just change the problematic tyre?

Experts say you should always aim to replace all four tyres at once. Tyres help with grip, transmission, braking and steering, so it’s a very good idea to ensure that they’re on equal footing. However, if you’re on a tight budget, you can get away with changing two tyres at a time within six months of each other.

Just don’t forget to change that second pair! It’s not a good idea to drive for two long on two tyres with inferior traction.

Previous Next
Related Posts
GET YOUR INSTANT
ONLINE QUOTE TODAY!
GET A QUOTE

Cookies are used on this site to give you the best possible online experience. If you continue to use this site we will assume that you are happy for your browser to receive our cookies. To find out more about our cookies and how to manage them view our Privacy Policy >